CRUSO, N.C. — Winding up the mountain roads below the Blue Ridge Parkway, mobile home parks along the Pigeon River are washed away, houses sit knocked off foundations, cars look like they were tossed down the river.

Torrential rains from Tropical Depression Fred caused flash floods Tuesday in Cruso, along the Pigeon River, and other communities in Haywood County. Four people died and five are still missing in the county, the sheriff said Friday.

The Cruso community, west of Asheville, is still closed off to outsiders as teams search for the missing and begin the long process of cleaning up. Two men who died, Frank Mungo, 86, and Franklin McKenzie, 68, were both found in the Cruso area, according to officials who have not announced the identities of the other two deaths.

The river was still high Friday, but nothing like what the people here experienced earlier this week. Broken trees, debris from smashed homes, even cars line the river, left on the banks as the water receded.

The river peaked in nearby Canton at almost 20 feet.

Teams from around the region searched the river in rafts and by foot Friday. At least 225 people from search and rescue teams came to help out, including using search dogs and drones, Haywood County officials said.

Driving up past the police checkpoints, Jared Williams said the water rose in his grandmother’s house, on a creek near the river, until it was chest-high in her kitchen.

“She was on the phone with my cousin when the line went dead,” Williams said from behind the wheel of his pickup Friday.

Emergency workers at first wouldn’t let Williams’ uncle back in to get his dog. When his uncle managed to get back to the house, he had to swim to the porch and found the dog treading water, Williams said. His family members and the dog survived the flood, he said.

Williams, 34, is a Marine Corps vet and lives over the border in Eastern Tennessee. He came to check on his grandmother’s house Thursday and was back again Friday to start cleaning up.

“I’ve seen this kind of destruction before, but it was in a warzone,” Williams said, referring to his 2007 tour in Iraq.

Williams said his grandmother has lived in that house since before he was born. It flooded once before, in 2004.

“They said that was a 100-year flood,” he said. He didn’t think it could flood like that again, but it did. And this time the water rose even higher.

More than a dozen bridges were washed away or heavily damaged in the flood, and that number doesn’t include private bridges, according to Haywood County Emergency Services Director Travis Donaldson.

“In places in Crusco there is what I would call almost complete destruction,” he said.

The site of a mobile home park in Cruso where many of the homes were washed away in the flash flood. (Photo: Charles Duncan)

“The amount of 911 calls our 911 dispatchers took that night was astronomical. They couldn’t answer the phone quick enough to grab the next one,” Donaldson said. “They were drowning in phone calls while others we’re drowning in Cruso.”

Downriver, in the Bethel community, Adele Barcia said she had to be rescued from her home as the water came up. A search and rescue team from Greenville, South Carolina, had to cross through rushing water and use a ladder to rescue her and her brother, she said.

“We heard there was going to be a flood, we had no idea the magnitude,” she said. “It came up bad and it kept rising.”

She said there was 10 to 12 feet of water in her front yard.

A long road ahead

It will take years to rebuild from the destruction in this part of Haywood County, Sheriff Greg Christopher said.

“It’s heartbreaking,” he said. “I actually live in the Bethel community, and this is my 42nd year in law enforcement. I’ve grown up here.”

“Whenever I see people who have lost everything that they’ve ever worked for — as I drive through and get out to speak to them,” he said. “The sad part is the only thing right now I can offer them is a hug and tell them that I love them, and we’re gonna be there to support them to work through this tragic situation.”

The county still has a shelter open with seven people, Donaldson said. Officials said they are still not sure how many people were displaced by the floods, but the number is likely quite high given the number of homes that were destroyed Tuesday.

In Canton, crews have been out cleaning mud from the roads and starting to put things back together. 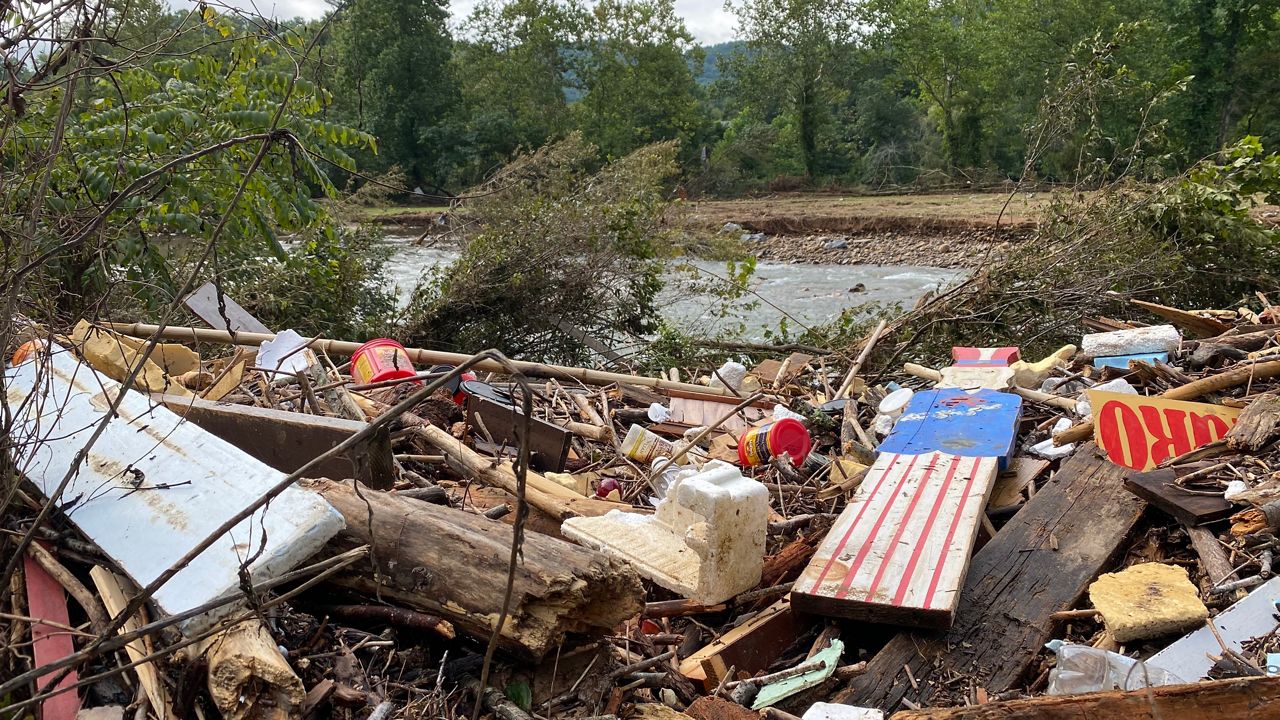 The river was still high Friday as crews continued to search for the missing and clean up the wreckage from Tuesday’s flooding. (Photo: Charles Duncan)

Department of Transportation dump trucks lined up Friday in many of the flooded areas and crews were starting to clean up the massive debris fields. People began to pile up the remnants of their flooded homes, beginning a cleanup that will take months.

Grapes before the bottle

Raleigh skyline will soon have another 20-story tower: 400H