For 47 years, Tim Bradley volunteered at the Mebane Fire Department.

In 2001, Bradley was working for the State Fire Marshal.

“We immediately recognized an increase in support of fire departments locally, as well as police and EMS, because people recognized this is the duty these folks have,” Bradley said.

During the cleanup, he went with a team to Ground Zero to bring the hundreds of thousands of dollars North Carolina firefighters raised for first responders’ families.

“What would occur when they would find the remains of a firefighter, they shut everything down. … Everybody would line up on this long ramp, probably a quarter of a mile long, and stand at attention while the engine company that that firefighter worked for came, got him and took him out,” Bradley said.

He now serves as the head of the North Carolina State Firefighter’s Association.

After year’s of work, he says they’re one step closer to achieving a major bucket-list item.

The State General Assembly has two items in the works related to firefighter health benefits.

One is in the budget proposal, expanding the list of cancers that fall under occupational diseases for death benefits. 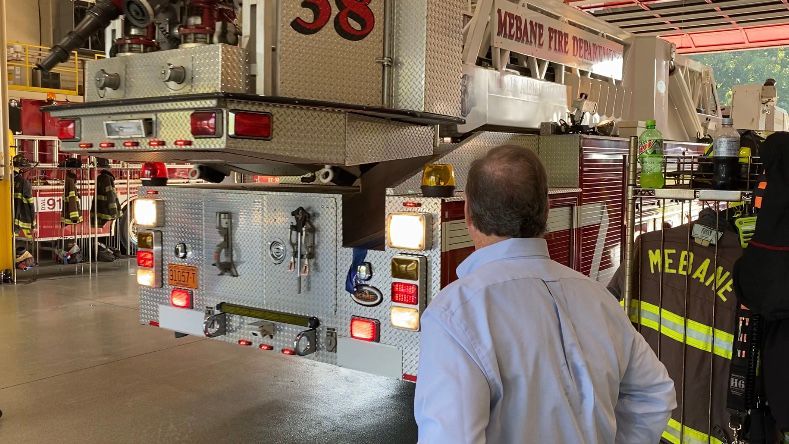 The other is “providing a cancer insurance policy so that when a firefighter acquires cancer and is diagnosed, they would receive a one-time benefit, and then ongoing monthly expenses,” Bradley said.

According to the Firefighter Cancer Support Network, from 2002 to 2019, cancer caused 66% of firefighter line-of-duty deaths.

The network also cites a CDC study that found firefighters had a 9% higher risk of a cancer diagnosis, and a 14% higher risk of dying from cancer than the general population.

Bradley says for years, they didn’t realize the risk they had when it came to cancer, but over the last decade or so it’s been brought to the forefront, especially by those Ground Zero responders.

“They began to see an increase in certain types of cancer and respiratory issues with firefighters that worked either on the pile or the pit. So yes that national issue brought federal benefits were granted, as well as state benefits for that,” Bradley said. “So nationally, it became nationally recognized that firefighters acquiring cancer as a result of the byproducts of fire is an issue.”

Both issues aren’t across the finish line yet, but he’s excited about the progress they’ve made, and the recognition his firefighters are getting for their work.

Davidson student prepares to travel world with a big goal