WILMINGTON, N.C. — Summer camps booked up quickly this year, and Marine Quest was no different in that regard, but besides that, it’s extremely unique. UNCW developed this outreach program in the form of summer camp to start building up the next generation of marine scientists in their own backyards.

The kids may look young but they’re capable of learning a lot, and things that interest them now could easily become future careers. Morgan O’Connell is the summer coordinator for Marine Quest now, but she first stumbled across the program in her sophomore year of high school.

Morgan O’Connell shows campers a creature found in the marsh

“I wish I could’ve done it when I was five like the kids we’re going to be hanging out with today,” O’Connell said. “If I could’ve had the chance to learn some of those technical research skills our high schoolers get an opportunity to, it would’ve been so much easier in my first few years of college.”

Staff and students at UNCW choose to give up their summers to participate in this program, but O’Connell said it never feels like a sacrifice because she’s getting to infuse her passion in the next generation of marine explorers.

“Having a chance to be in these authentic research environments is a real huge advantage for the students and just helps them have a better understanding what they might be getting themselves into in the future,” O’Connell said.

Kids between the ages of 4 and 17 spend a week at a camp in either half-day or whole-day programs, but either way, they find themselves immersed in the day-to-day life of a marine scientist. O’Connell wishes she would’ve found it sooner when she was young but says working with the kids now and experiencing their discoveries firsthand is something she wouldn’t trade. 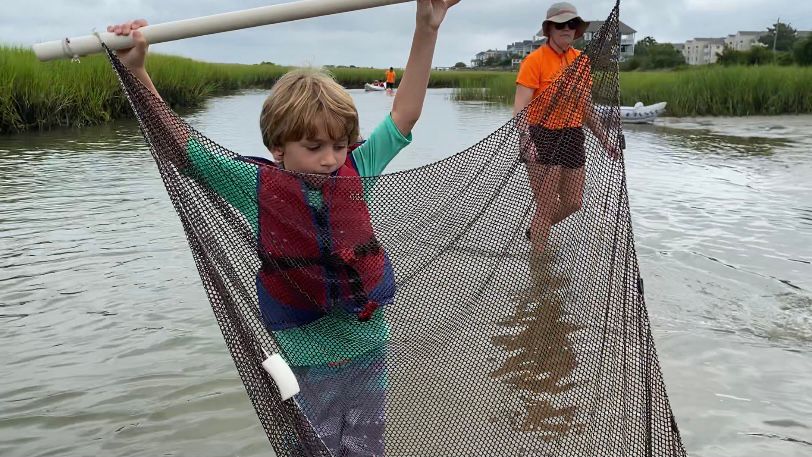 A camper works with a seine net in the marsh

“One of my favorite things  about Marine Quest is they don’t realize how much they’re learning because of how much fun we’re all having together,” O’Connell said.

Marine Quest has been the primary outreach program for UNCW’s marine science program for the past 40 years, and it may look and feel a bit more like school than some kids want. But for these young budding scientists, it’s a rare opportunity to get real experience in the field.

“To see these young kids who might become future staff members or future faculty members at UNCW is really amazing, and just knowing that we’re helping to teach the future generation how to protect and conserve these wonderful assets that we have is one of the best things in the world,” O’Connell said.

Summer camp has wrapped up for this year, but it was such a success Marine Quest is hoping to launch Saturday night programs in the fall that will give parents a night off and kids a night out.

WILMINGTON, N.C. — As the North Carolina coast continues to surge in population the N.C. Department of Transportation is scrambling to create infrastructure that supports…