JACKSONVILLE, N.C. — There are 13 memorials on the roadside, just feet from the busy highway leading up to the main gate at Camp Lejeune. Each one has a pair of boots, flowers, American flags, unopened beers and mementos surrounding a photograph.

The photos, some blurred or a little grainy, each list the name of the Marines, one soldier and one sailor who died when a suicide bomber attacked the Kabul airport last week. More than 160 Afghan civilians also died in the attack at the gate to the airport where many had gathered to try to get on a flight out of the country to escape the Taliban.

People hung tarps and sheets from a fence along the road, listing the names of the dead and honoring those killed in action.

“My first time at Lejeune, these fences were flooded with all of these tarps and memorials,” said Kayla Huss as she knelt in the grass, adding more flowers to the growing shrine. She said her husband is an active duty Marine and this is her second time being based at Camp Lejeune.

“We kind of got into the groove of not having that happen anymore, and I feel bad for these young Marines and spouses and sailors. They’re just not used to it,” she said.

In this Aug. 20 photo, Sgt. Nicole Gee calms an infant during the evacuation at Hamid Karzai International Airport in Kabul, Afghanistan. Gee was one of the Marines killed in Thursday’s bombing at the airport. (Sgt. Isaiah Campbell/U.S. Marine Corps via AP)

“It’s not really something we should be used to,” Huss said. “I’m just trying to help them out, show them it’s OK to have feelings and emotions.”

The memorial for Gee has an open bottle of Barefoot Pink Moscato wine and two cups with once-frozen drinks from Starbucks. Flowers are piled around. The photo in the center of the memorial shows her holding a baby in Afghanistan, looking down at the small child.

“Her last breath was taken doing what she loved—helping people—at (Hamid Karzai International Airport) in Afghanistan. Then there was an explosion. And just like that, she’s gone,” Mallory Harrison, another Camp Lejeune Marine and friend of Gee, said on social media.

“Our generation of Marines has been listening to the Iraq/Afghan vets tell their war stories for years. It’s easy to feel distant when you’re listening to those conversations, it’s easy for that war & those stories to sound like something so distant,” she wrote.

“Then bad people do bad things, and all of a sudden, the peaceful float you were on turns into you going to Afghanistan & for some, never coming back. It turns into your friends never coming home,” Harrison said in the post, sharing photos of Gee.

Spectrum News 1 reached out to Harrison, but she did not reply.

The memorial to Gee and the 12 others continues to grow by the main gate in Jacksonville, with people pulling their cars over to add their own flowers, a can of their favorite beer or other mementos.

Huss said the Food Lion grocery store by her house has almost run out of flowers. She bought some small roses to add for her contribution. 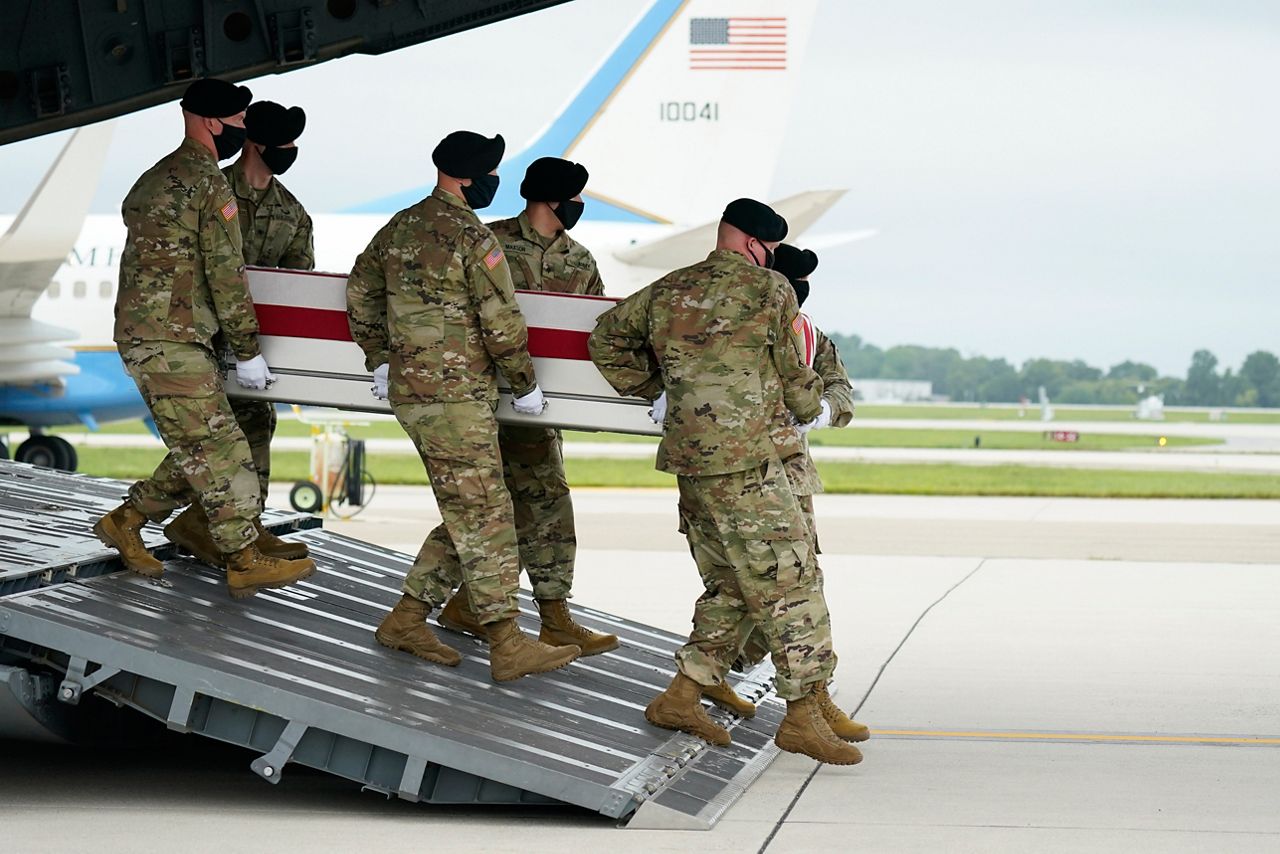 A carry team moves a transfer case containing the remains of Army Staff Sgt. Ryan C. Knauss, 23, of Corryton, Tenn., Sunday, Aug. 29, 2021, at Dover Air Force Base, Del. According to the Department of Defense, Knauss died in an attack at Afghanistan’s Kabul airport, along with 12 other U.S. service members. (AP Photo/Carolyn Kaster)

The bodies of the 13 service members killed in Afghanistan on Aug. 26 arrived at Dover Air Force Base on Sunday.

The Department of Defense released the names of those killed over the weekend:

As Biden improves support with vets, Afghanistan plan a plus to some

ELM GROVE, Wis. — Patrick Proctor Brown says the war in Afghanistan was lost within a year of its start. The suburban Milwaukee lawyer, who…

This week in Congress: Details on the Afghanistan withdrawal plan

NCCU economist: rather than ‘First in Talent,’ NC’s positioning should be ‘First in Equity’