Hurricane Ida made landfall at 11:55 a.m. Central Time on Sunday near Port Fourchon, La. Its top sustained winds were estimated at 150 mph.

Conditions continue to worsen over the northern Gulf Coast as the storm now moves inland.

The powerful hurricane continues to move into Louisiana this afternoon. Storm surge of 5 to 6 feet has already been observed in some places.

Ida’s sustained winds of 150 mph match those of Hurricane Laura when it made landfall in Louisiana in August 2020.

Aircraft reconnaissance flights continue to provide updates on Ida’s intensity. You can see the incredible view from inside the hurricane in the tweet below.

Dangerous storm surge over 9 feet deep, and possibly as high as 16 feet, may occur near the core of the storm. Much of the Louisiana, Mississippi and Alabama coast will see several feet of storm surge inundation. 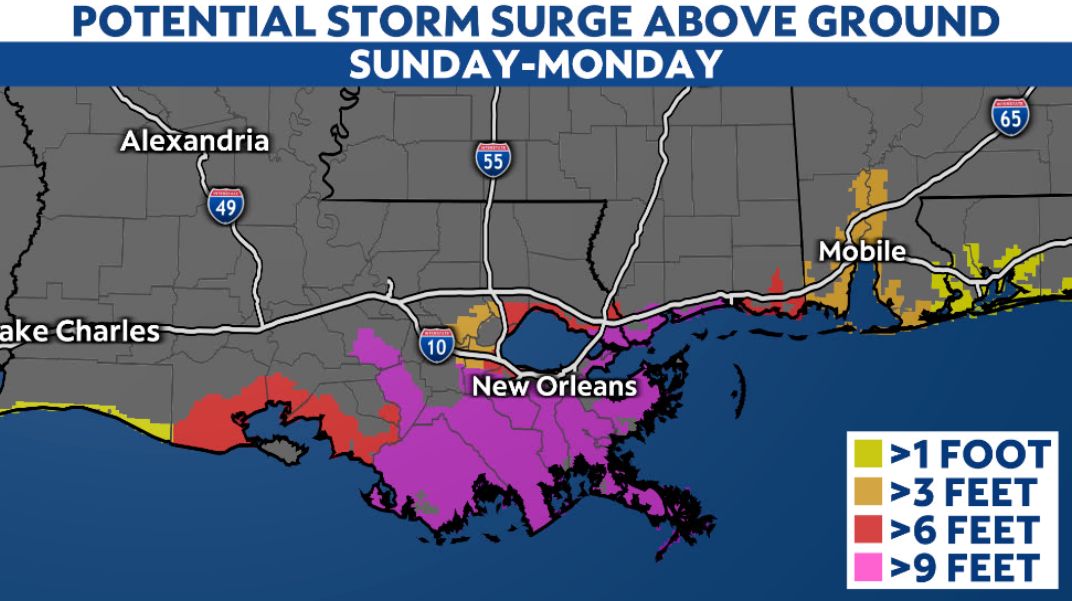 Most of the pumps in New Orleans are ready for service to try to limit flooding in the city.

Currently, 96 of 99 drainage pumps are available for service. The pumps that are down are located at DPS 14 in New Orleans East, DPS 6 in Lakeview near Metairie Road and DPS 12 in Lakeview near Lake Marina Drive.

Destructive wind damage is expected in southern Louisiana as winds exceed 110 mph. The strong winds will spread inland as Ida tracks north on Sunday. Winds this strong will cause power outages, snap trees and damage or destroy structures. 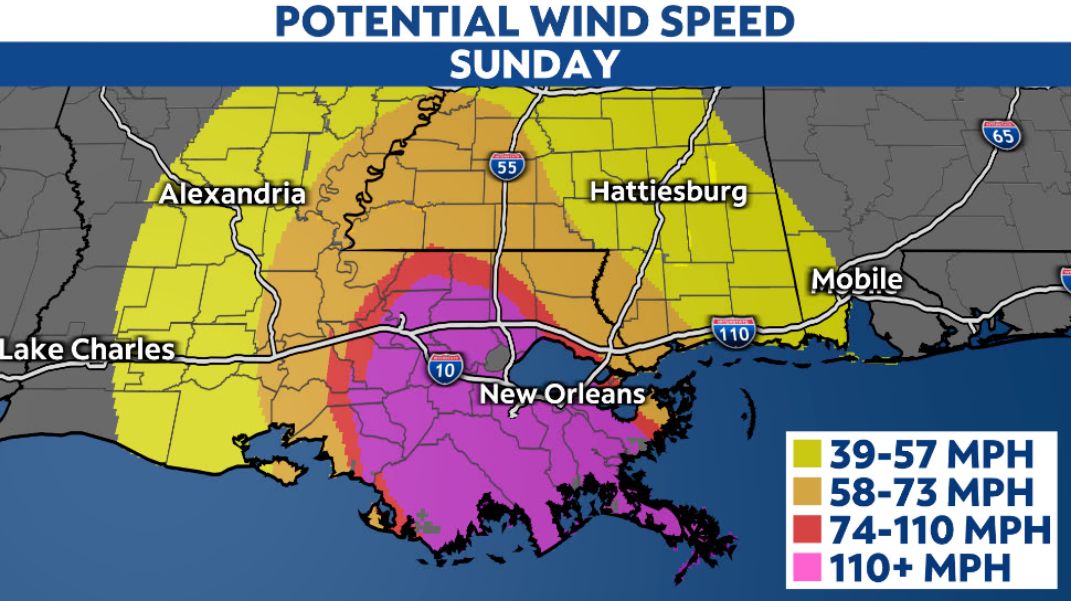 The heavy rain threat will spread inland by Sunday continuing into early week as Ida moves north. Flooding is possible for much of Louisiana and Mississippi. Coastal areas in Louisiana could see over one foot of rain. 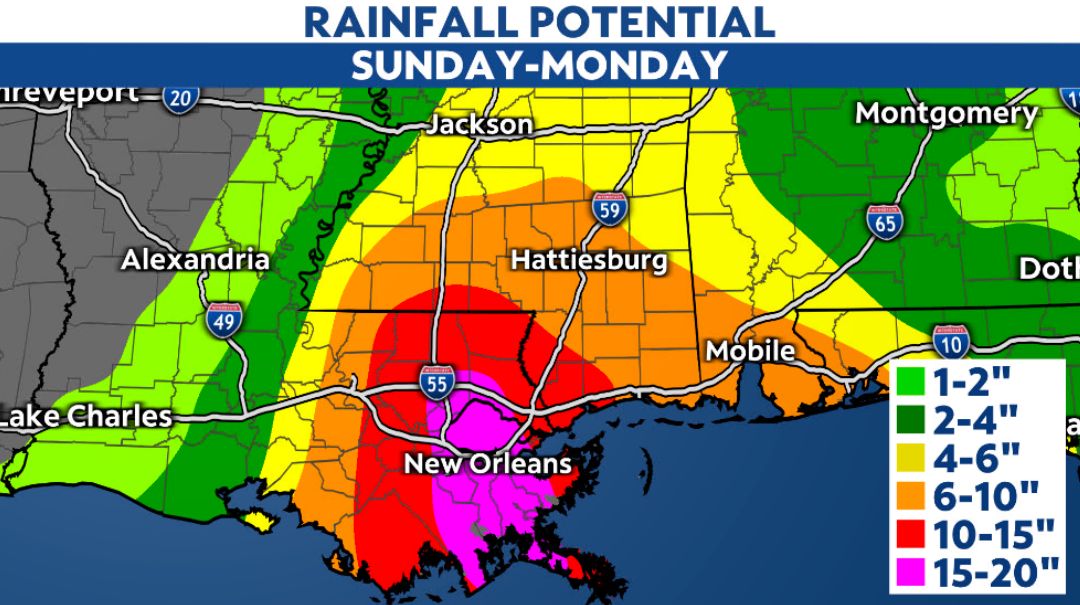 Spaghetti models agree with one another that the center of Ida’s track will hit southeastern Louisiana, then hook toward the northeast. However, Ida’s effects will extend well beyond the center of the storm.

Spaghetti models or plots show a series of individual computer forecast models together on one map. They are useful to give insight into whether multiple models are in agreement or not on the path of the storm but they do not address the storm’s forecast intensity, winds, flooding and storm surge potential or other data. Tap here for more details on to best use these models. 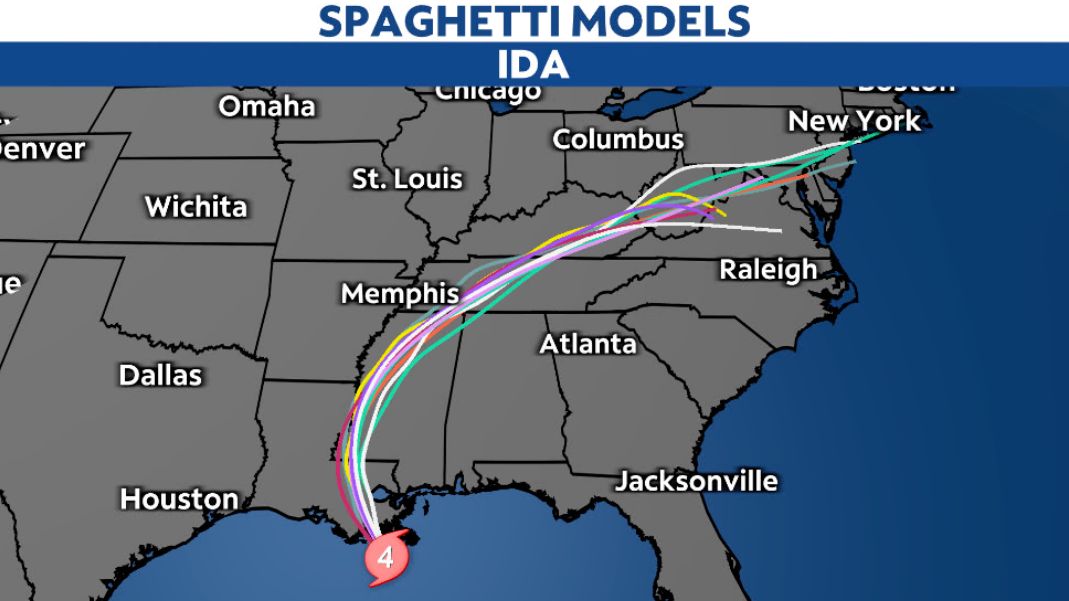 Spectrum News Meteorologist Jesse Gunkel, who spent 12 years forecasting weather in Baton Rouge, La., knows what the recovery process is like after a hurricane such as this. Lake Charles, La., will be spared from the worst of Ida, but the hurricane’s intensity is similar to Hurricane Laura, which devastated Lake Charles in August 2020.

“It takes years to recover from a hurricane,” Gunkel says. Many rely on federal assistance to rebuild. “Even if you have the financial means, it still takes time to hire licensed contractors and to order the proper building materials,” he adds.

Southwestern Louisiana was hit by another hurricane just weeks after Laura, followed by an ice storm this past winter. Then, in the spring, widespread flooding inundated homes. “Every new weather hazard is another delay,” Gunkel says.

Even if those hit hardest by Hurricane Ida don’t have more storms to deal with in the coming months, recovery will take a long time. “Because of the mass amount of damage in [an] area, typical projects may take months to complete because of competition and sheer volume. In some cases, a contractor may not even step on your property until a year later.”

Tropical Storm Julian formed on Sunday and will remain far from the U.S.

Tropical Depression Ten is moving through the open Atlantic. One other tropical disturbance has a high chance to develop over the next five days, while another off the Mid-Atlantic coast has a low chance of development. Track all three here.

Mapping out this complicated process

NEWLAND, N.C. (AP) — Court documents say a woman whose body was found buried in concrete in the basement of her western North Carolina home…