WILMINGTON, N.C. — The backed-up supply chain is causing issues all over the globe for consumers and distributors alike, but North Carolina happens to have two ports that are facing the challenge firsthand on the coast.

Brian Clark, the executive director for N.C. Ports, says even with carrier ships coming in off schedule, there’s always something to do at the port. He has teams working around the clock to keep cargo moving off the ships, into the yard and then to the truckers, who are ready to get the goods to suppliers.

Crews work to unload a container ship in port

“There’s certainly a lot of people looking at what can be done differently, but it takes every piece of that supply chain really working in concert,” Clark said. “A port can operate 24/7, but if the trucking community or the warehouse is not open, distribution centers are not open, obviously that’s where a delay could occur.”

The ports at Wilmington and Morehead City see a total of 1,000 ships in a year as they send and receive cargo, and so far they haven’t taken in any ships that wouldn’t normally come to our ports. Wilmington alone handles eight different container ships in a week and has yet to see cargo backing up in the yard. 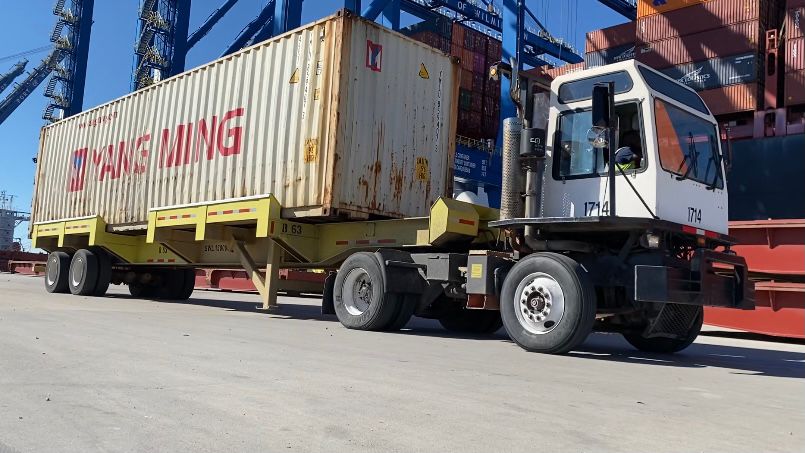 A container being transported to be loaded on a cargo ship

Clark said the delays frequently start elsewhere and are out of his control by the time a ship arrives in port. At that point, it’s a matter of unloading and reloading cargo as efficiently as possible to keep supply lines moving.

There are around 1,000 people working on the shipping operation at any given time, and he says they’ve had to adapt numerous times in the past year to the challenges and the unknowns in the industry.

“Everybody plays an important role in the process, making sure we have sufficient space in the yard, equipment, employees,” Clark said. “At the end of the day it’s continuing to deliver on the service that we’re known for.”

In the meantime, he recommended that people be patient with supplies and be prepared to experience potential delays into the new year.

CHARLOTTE, N.C. — The Carolina Panthers have their next general manager, as Scott Fitterer accepted the job on Thursday. Fitterer has been with the Seattle…