The new maps likely create a 10 to 4 split for Republicans in North Carolina’s congressional delegation and the GOP will hold onto its majorities in the state House and Senate.

The three maps passed on party-line votes. The governor has no veto power over redistricting.

North Carolina has a long history gerrymandering, drawing maps to basically pick which party will win. Both parties have done it when they’ve been in power. The maps drawn after the last census in 2010 led to a political and legal fight that lasted almost a decade.

One lawsuit has already been filed, before these new maps were even finalized, accusing the Republican-led General Assembly of illegal gerrymandering.

“We found that the map that has been proposed for the North Carolina House really dramatically under-elects Democrats. We have similar analysis for the Senate,” said Jonathan Mattingly, a Duke University mathematician who uses mathematical models to analyze gerrymandering.

He testified in court cases that found North Carolina’s last set of maps were unconstitutional.

The maps have been widely criticized by Democrats and academics that study redistricting and gerrymandering.

“Free and fair elections are the cornerstone of our democracy and we can’t have fair elections without fair maps. North Carolina is an evenly divided state, and we should have a congressional delegation that reflects our citizens,” Rep. Deborah Ross, a Democrat, said in a statement Wednesday.

“I am confident that the House and Senate have approved redistricting plans that include maps that are constitutional in every respect,” Moore said.

“I think it’s really important not just to count seats, but to see how people have been put into districts. With the (congressional) maps we’ve been given, the districts that are in play have many, many less Democrats than one would typically see,” Duke’s Mattingly said.

Despite the legal challenges already filed, the maps probably won’t change before next year’s elections, said Michael Bitzer, a political scientist at Catawba College who just published a book on the history of redistricting in North Carolina.

“Unless there’s egregious maps,” Bitzer said in an interview last month. The courts “would let the process play out with maps that are being challenged,” he said.

The new congressional map will likely be a 10-4 or 11-3 split in favor of Republicans.

Based on analysis from Duke and the Princeton Gerrymandering Project, North Carolina’s new congressional map will likely lead to electing 10 or 11 Republicans and three or four Democrats.

The congressional map divides the Triad’s urban areas, a particular concern for Democrats, who fear that it could dilute their voters in the Greensboro and Winston-Salem areas.

“Under these maps, Guilford County is split into three congressional districts, diluting my constituents’ interests and lumping them in with far-flung counties in the western mountains, the suburbs of Charlotte, and as far east as Wake County,” she said. “These maps don’t acknowledge that the Triad is a region with shared interests, concerns and needs.”

“These maps were created for one purpose only: to ensure Republicans win more House seats so that they can recapture control of the U.S. House of Representatives,” Manning said in a statement.

Rep. G.K. Butterfield’s seat in Congress could also be in play for Republicans. Butterfield, who was first elected to Congress from northeast North Carolina in 2004, is on the list of seats the National Republican Congressional Committee plans to target in 2022.

The biggest change in Butterfield’s district is moving Greenville and most of Pitt County into another district.

“It takes thousands of Democratic voters out of my district and places those into another district, which means my district becomes less Democratic and less African American,” Butterfield said in an interview with Spectrum News 1 after the maps were approved Thursday. He argued that the new map violates the Voting Rights Act by diluting Black votes.

The new map also puts Rep. Alma Adams, a longtime Charlotte Democrat, in the same district as Republican Rep. Dan Bishop. But Bishop told Spectrum News he would likely move to stay in his current district and run for re-election in 2022. 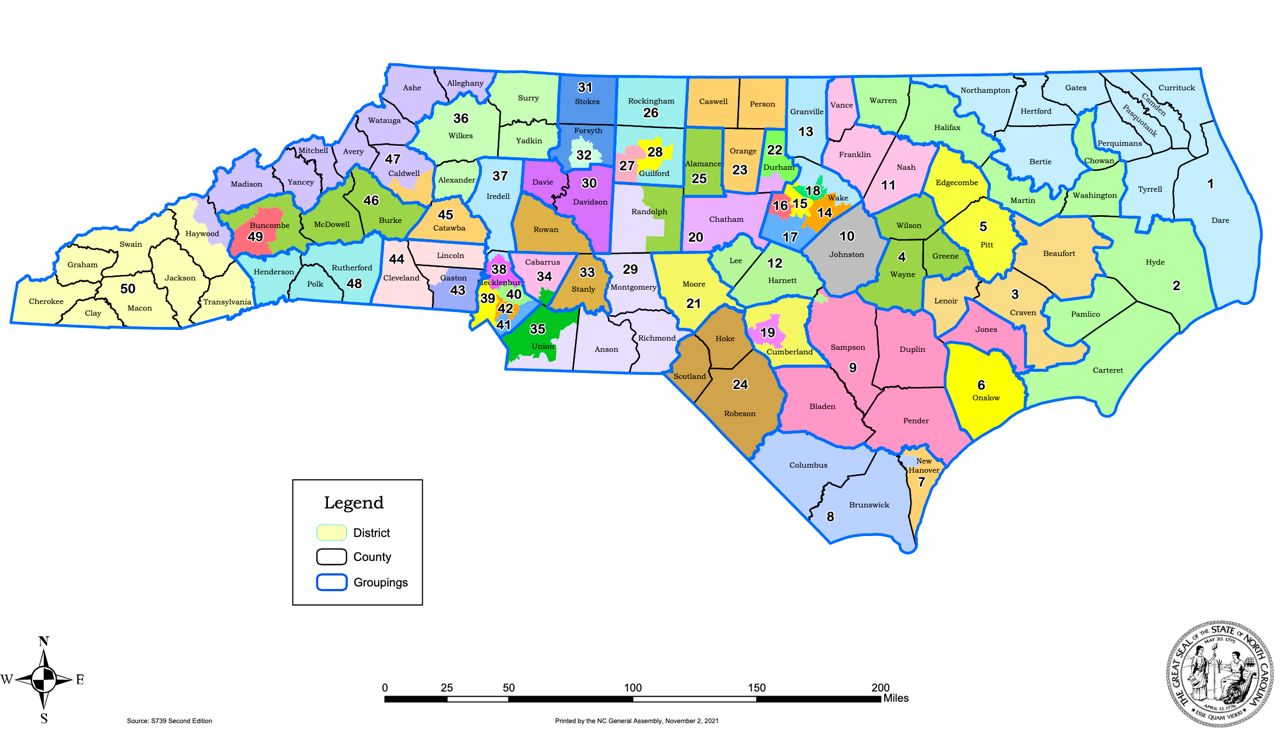 The new map for North Carolina Senate districts will allow Republicans to hold onto their majority and potentially get a supermajority.

Like the congressional map, the Princeton Gerrymandering Project gave the state legislative maps an “F” grade overall and in partisan fairness.

“The state legislative maps would put Republicans at or within reach of veto-proof majorities in both chambers,” said Asher Hildebrand, a former chief of staff for Rep. David Price who now teaches politics at Duke University.

According to the Princeton University project, the new North Carolina House map will likely have 70 districts for Republicans and 50 for Democrats. There are 17 seats that are considered competitive.

For the North Carolina Senate map, the Princeton researchers say Republicans would likely win 30 seats and Democrats 20. They say seven seats in the state Senate could be competitive.

If Republicans can win the competitive seats in the House and Senate, they could gain supermajorities to overcome any vetoes from the governor. 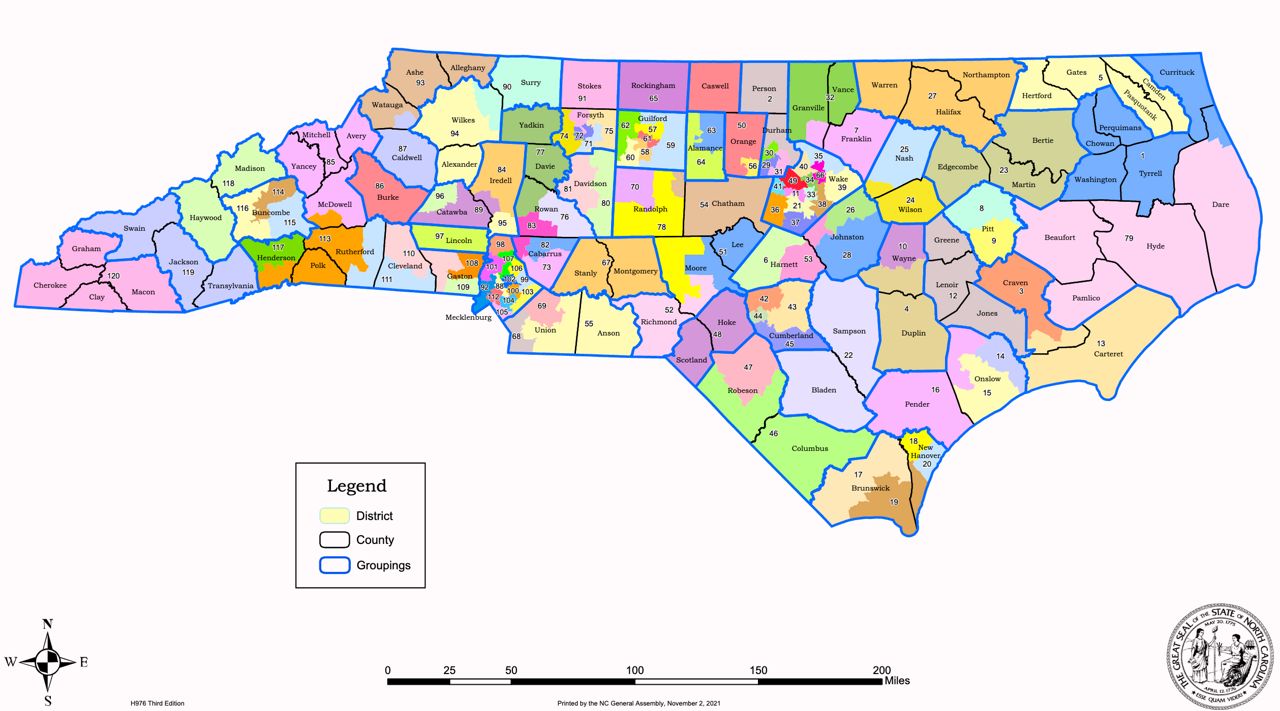 The new districts for the North Carolina House will keep Republicans in power, according to analysis by researchers at the Princeton Gerrymandering Project.

CDC warns delta variant is as contagious as chickenpox

How Tim and Ben tie it together each week

In a Friday afternoon ceremony at the White House, retired Army Col. Ralph Puckett received the Medal of Honor from President Joe Biden. The 94-year-old,…