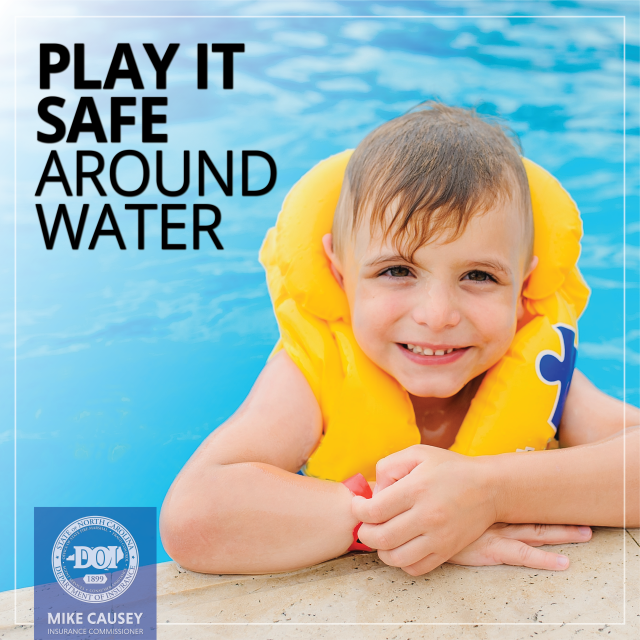 Millions of people in North Carolina will be heading to pools, lakes and the ocean to enjoy outdoor water activities this Memorial Day weekend. Insurance Commissioner and Safe Kids NC Chair Mike Causey reminds families to play it safe around water and take time to talk to your kids about water safety.

“One of the great things about North Carolina summers is the fact that we have so many options for fun water activities, but they can also be very dangerous. We have to respect the water,” said Commissioner Causey. “We want parents and caregivers to be particularly cautious and take steps to avoid any potential tragedies in swimming pools and other bodies of water.”

The North Carolina beaches will be crowded. Remember to pay attention to the warning flags at the beach that indicate the possibility of rip currents. Teach children what to do if caught in a rip current. That is, stay calm, don’t fight the current, when free of the current, escape the current by swimming in a direction following the shoreline. If at any time you are unable to reach the shore, draw attention to yourself and call for help.

Most people believe a drowning person involves flailing arms or frantic calls for help, but that scene is often incorrect. Drowning can happen quietly when a helpless person is unable to take in a breath or call for help. The CDC estimates 10% of parents watch their children drown because they don’t know what’s happening. Rescuers may have as few as 20 seconds to save a person from drowning.

Safe Kids Worldwide has released the following information highlighting the dangers of childhood drowning, with a specific focus on incidents that occur in lakes, rivers, oceans, and other types of open water:

A proposed constitutional amendment to make the state superintendent of public instruction the chair of the N.C. State Board of Education will be considered by the N.C….